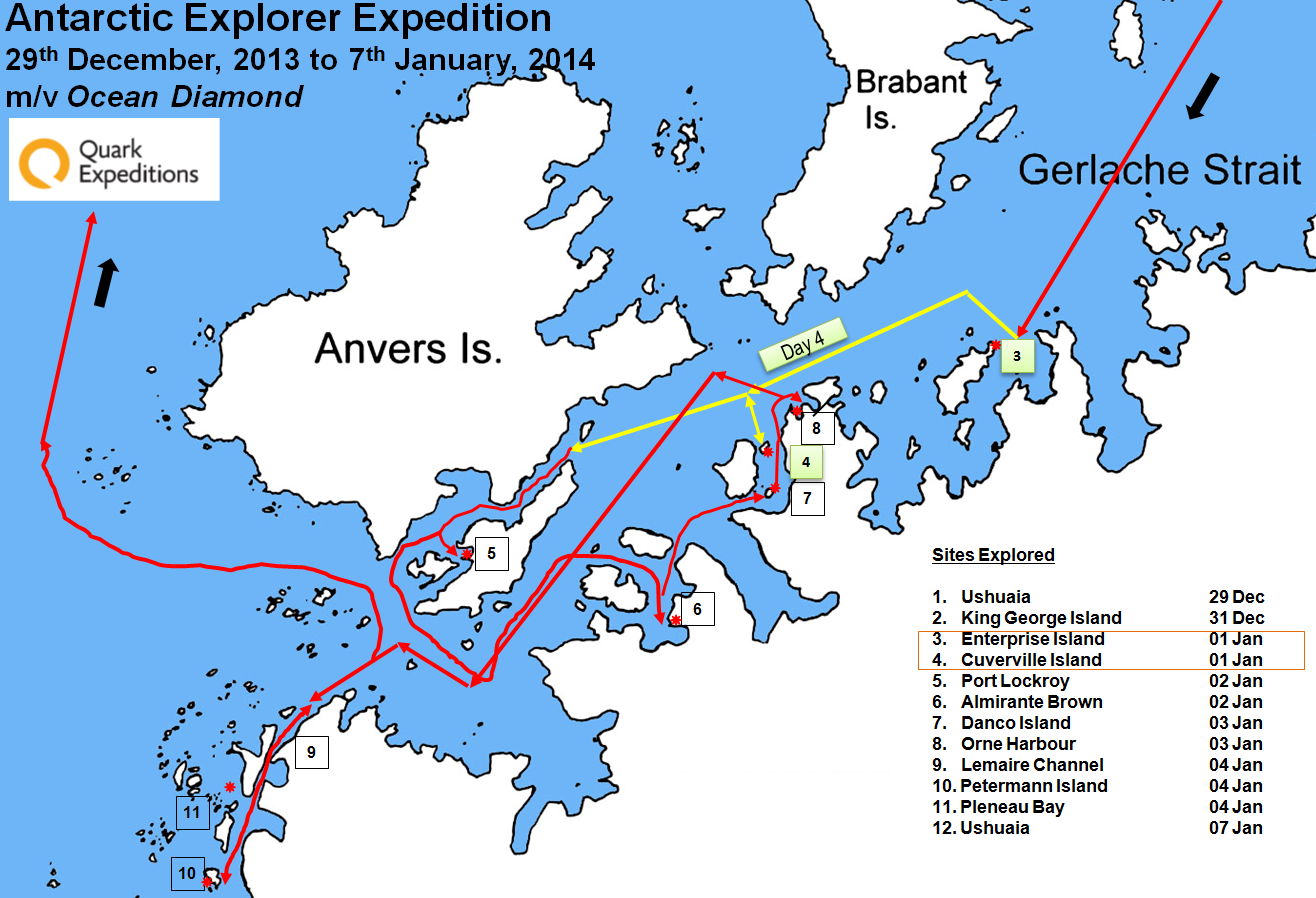 At 7am an announcement was made on the ships PA system that there are humpback whales close to the ship and we should get out and see them. I wanted to. I really wanted to, but couldn’t get up. Today was going to be a full day off the ship in Antarctica and I wanted to be as rested as possible for my time off the ship. Breakfast was served from 7:30am but I only went at 8am. 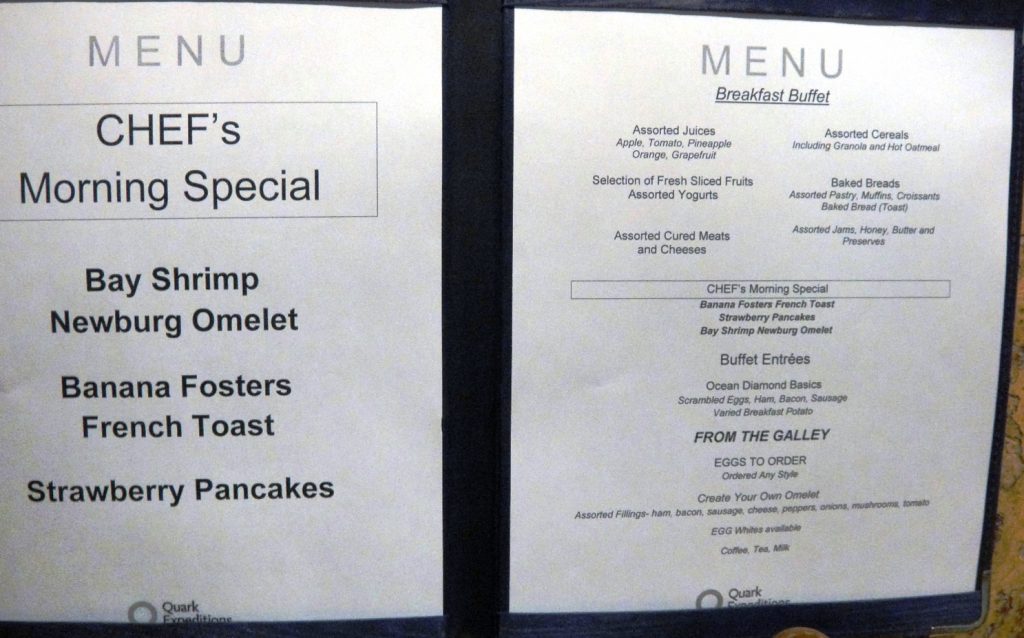 Just after 9am we arrived through the Gerlache Strait into Wilhelmina Bay by Enterprise Island.

The skiers would go onto Enterprise Island but the rest of us would cruise around on zodiacs in Wilhemina Bay.

We spotted our first Gentoo penguins – the first of many. Here was my first spotting of a Weddell Seal. 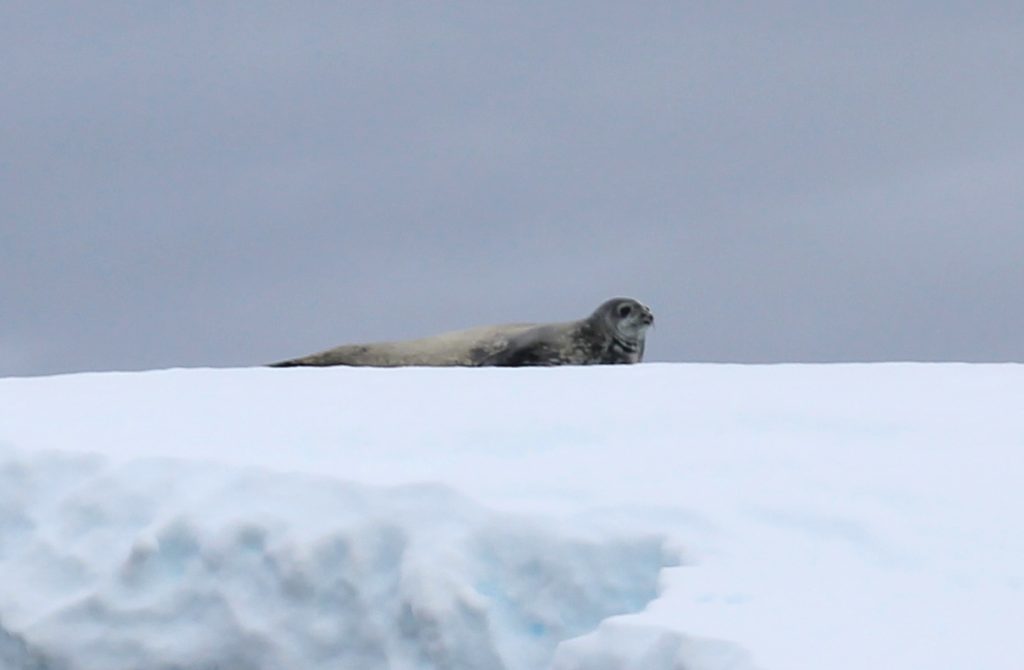 We cruised around the Governoren, a shipwrecked Norwegian whaling boat. The boat caught on fire and was deliberately run aground at shore with all crew and some supplies transferred off the boat in the early 1900’s before they were rescued by another whaling vessel. I’m glad all humans survived but wish that the crew were not there annihilating the whale population.

We got good close up views of some cool ice bergs.

The view of the mountains around Wilhelmina Bay was amazing.

The zodiac cruising by itself is fun – especially in Antarctica!

We returned on board the ship for lunch and I caught up on a little sleep as the ship headed towards Cuverville Island.

At Cuverville Island I got off the ship (by zodiac transfer to land) and walked in Antarctica for the first time. Can you experience anything better on New Year’s day?

We visited our first Gentoo penguin colony. But before we saw them we could smell them, or their Guano: Penguin droppings on the snow.

We saw penguin highways also – these are the little roads that the penguins create by walking on the same paths on the ice in their hundreds or thousands. 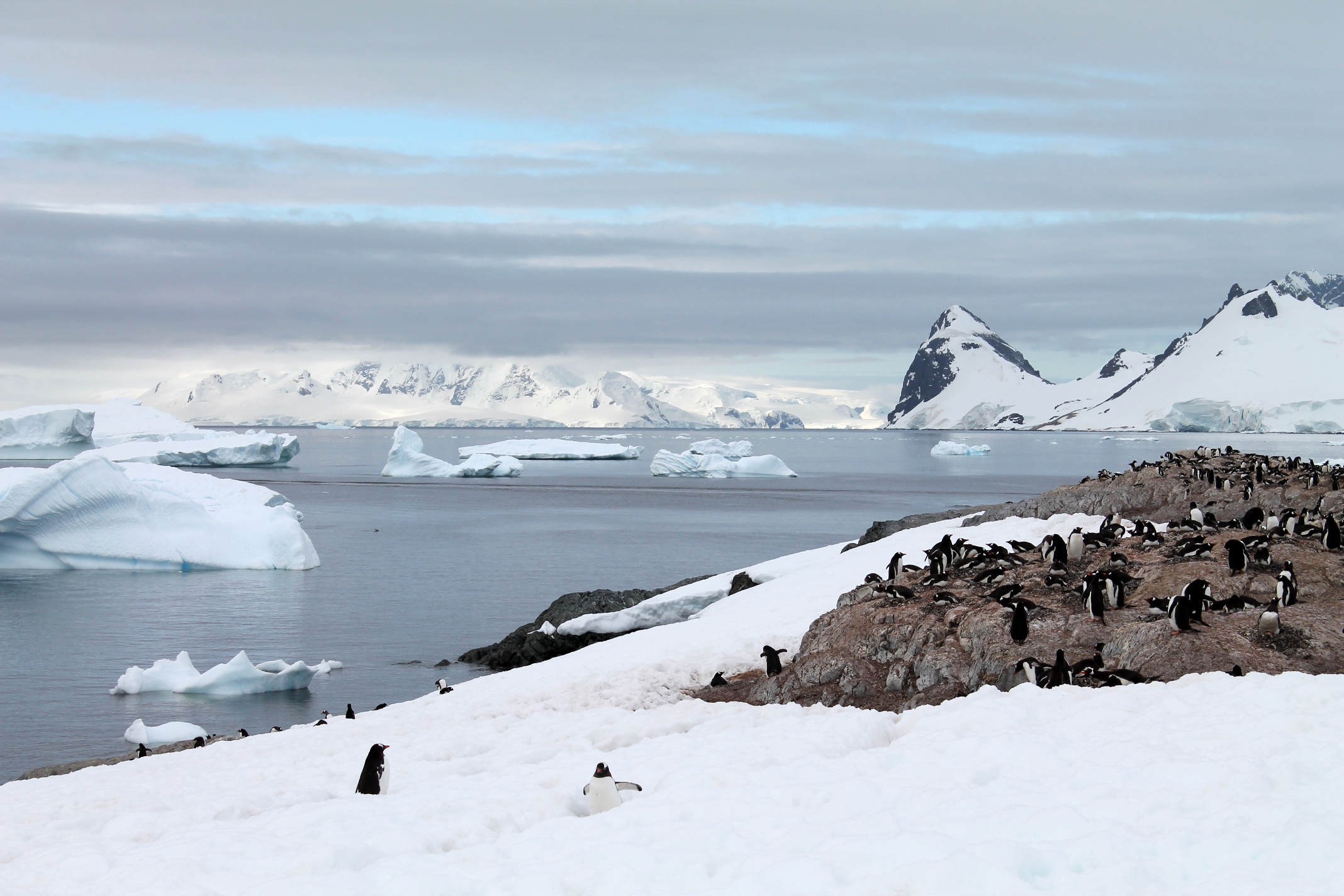 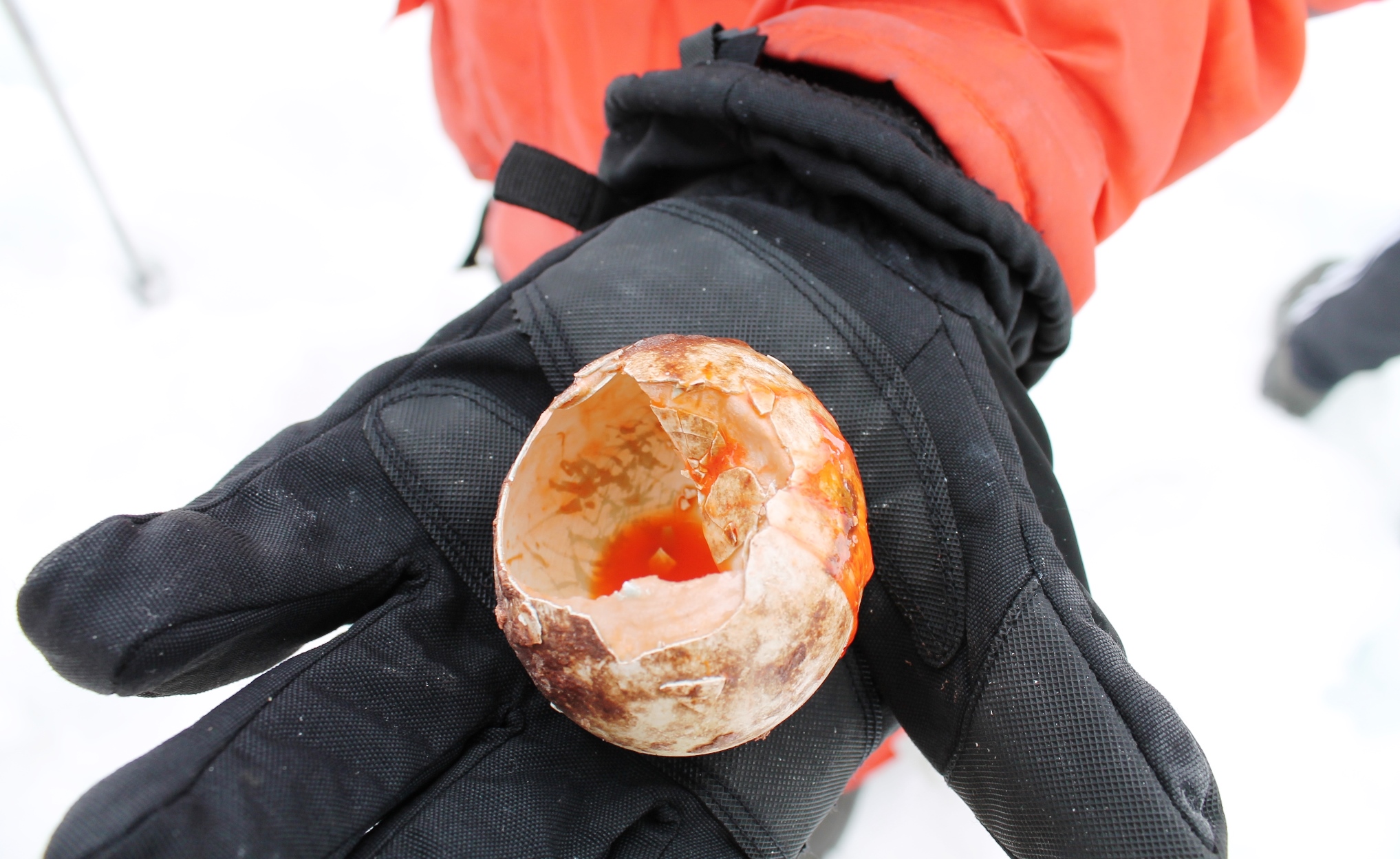 After spending about 1.5 hours on shore I headed for the zodiac for a 1.5 hour cruise in Wilhelmina Bay. IAATO regulations state that no more than 100 passengers from each cruise ship can be on land at any point in time. Since the Ocean Diamond had 185 passengers on the cruise we had to form 2 groups (on a first come first serve basis) – half goes onto land and half go zodiac cruising before swapping.

That zodiac cruise was memorable.

It started snowing so we got to cruise through a little blizzard.

We saw an iceberg turn a little – this happens when some of the ice breaks off the iceberg and the iceberg rotates to rebalance itself. This particular iceberg did not rotate 180% as it sometimes can = nevertheless it looked spectacular and we had to keep our distance as it can create some large waves which are not good if we are on a zodiac nearby.

We managed to get a close view of a crabeater seal. An interesting fact is that the crabeater actually eats krill (at least 95% of its diet), rarely crab, but it has that name as its scientific name, translated as “lobe-toothed (lobodon) crab eater (carcinophagus)”, refers to their finely lobed teeth adapted to filtering their small crustacean prey. 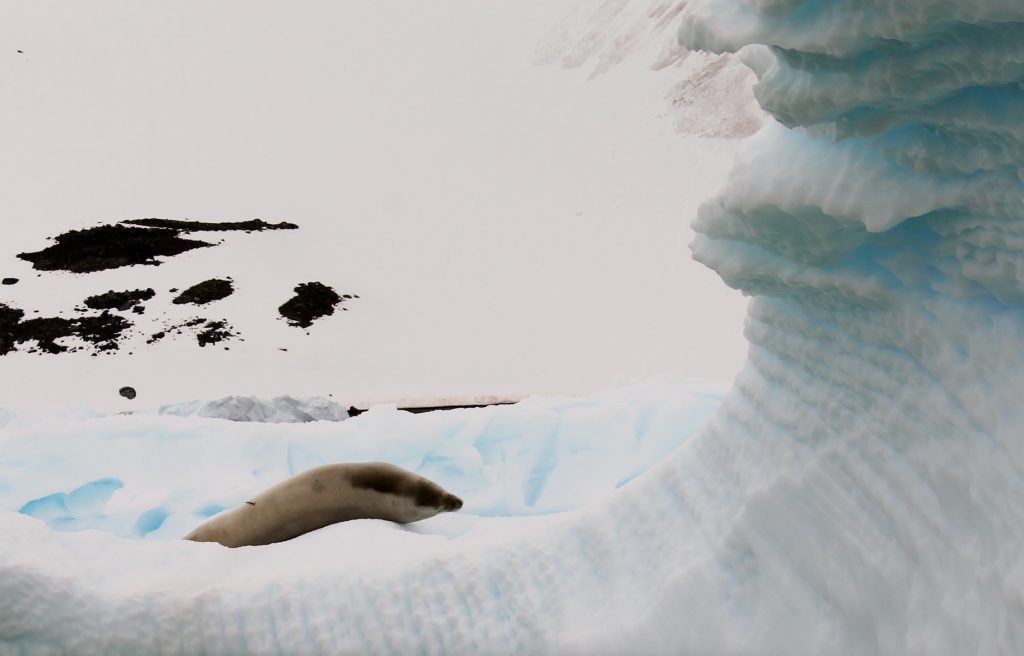 It was a full day so we didn’t have time for an expedition briefing before dinner that evening.

There was a tango demonstration that evening in the Club Room but I was up in the Observation Lounge writing up my blog post on Ushuaia and reviewing my photos for the day.

There was also a talk in the lounge for those of us who were planning to camp in Antarctica where they advised us on what to wear and the sleeping options available (within a 2-person tent or one of the limited bivy’s).

I also skipped the Frozen Planet screening of “Autumn” in the Main Lounge and In-Cabin film “The Best Exotic Marigold Hotel” that night and spent time watching the sun set – ever so slowly.

Even though the sun did set where the ship was located it never really gets dark in Antarctica.