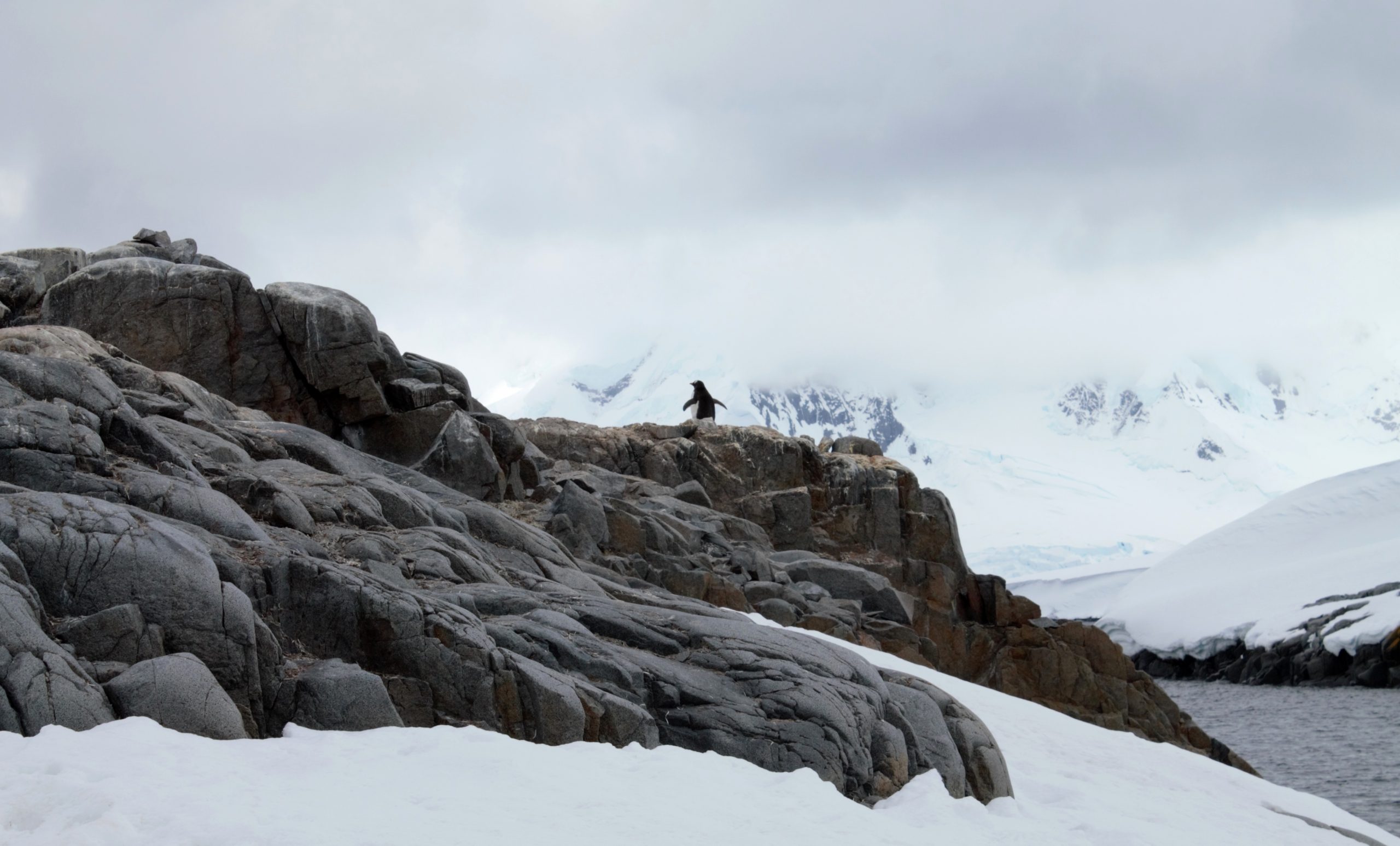 This morning we had to get up early for the program with the Port Lockroy base in British Claimed Antarctic territory which is run by the British Antarctic Heritage Trust.

The ship was split into two and we would take turns by either listening to a lecture program by the base personnel staff and a talk by the onboard historian on “The True Endurance of Ernest Shackleton” first or visiting Jougla Point on Gourdier Island and the Port Lockroy base by zodiac.

I listened to the talks first.

I then took a zodiac to Jougla Point where I saw Gentoo penguins on the rocks.

And the beach where we landed.

We saw a lone chinstrap penguin in this Gentoo penguin colony. Seemingly lost…

There were quite a few eerie looking whale skeletons on land.

The snow was knee deep so we had to watch our step.

It was a great opportunity to take out my national flag.

I then transferred to the Port Lockroy base which has been designated a Historic Site and Monument No. 61 under the Antarctic Treaty.

I first checked out the museum. The original British ‘Base A’  established during World War 2 in February 1944 has been restored to show how life under the 8 man wintering team was like.

I first checked out their sleeping quarters. Cozy!

and their radio room.

Before leaving I added my name to the guestbook.

Lots of the passengers made purchases at the souvenir shop. I carried my credit cards and US Dollars but couldn’t find anything small to purchase (I had 3 more weeks of travel after the cruise and did not want to have any additional big items in my bag).

The previous night on the ship I purchased postcards, completed them and left it at a collection area in the ship.We were told that we should expect to receive those postcards back at home in anything between 6 weeks and  6 months’ time. It only costs $1 to send a post card and the moneys go to the British Antarctic Heritage Trust.

One cool thing about visiting Port Lockroy is that you can get a stamp of Antarctica in your passport.

It’s hard to observe the 5m rule of keeping away from wildlife in Port Lockroy as the penguins live within the base facilities.

We returned to the ship and it set sail for Paradise Harbour.

I used this opportunity to try out the small gym on the ship – 30 minutes on the treadmill and some stretching.

After lunch I headed straight for the main lounge. We knew that they were going to hand out our sleeping gear for camping and I wanted to ensure that I am near the front of the line when they give out the bivy’s. There were only about 20 bivy’s available for about 60 campers and I am glad I got one.

I made my first 1st landing on the Antarctic Peninsula; on the 7th continent where the unoccupied Almirante Brown Argentinian station is located.

The base is currently uninhabited but gets a fresh coat of paint every few years.

We walked a little uphill to get a better view of Paradise harbor. Not too difficult going uphill.

We then did some zodiac cruising on Paradise Harbour.

We checked out the glaciers of Skontorp Cove where calving regularly occurs, and a variety of birds on the nearby cliffs.

And some beautifully carved blue icebergs.

I had gotten snow onto my glove which melted and then really began to chill my fingers on that 1h15m zodiac cruise. I changed to a dry set of gloves but this did not help warm my fingers. Only 30 seconds of running hot water from the tap onto my fingers back on board helped to restore the warmth in my fingers.

Early dinner (by 15 minutes) was served to the campers that evening (starting at 1915). I had fried tofu and 2 helpings of dessert. I then dressed up warm and headed for the zodiacs at 9:30pm with my gear to spend a night at Leith Point on the Antarctic Peninsula, overlooking Paradise Bay.

Once we arrived at the camping area we were given initial instruction (particularly to remain within a flagged zone), asked to collect a sleeping mat, choose a camping spot, setup and meet a little later for further instructions.

I chose a spot a bit further from the tents where the noise would be minimal and where there seemed to be less wind.

I wasn’t going to have the benefit of a tent to shield me from the wind.

After setting up I took some photos of the surrounding area and proceeded to the “latrine area” .

Final instructions were provided to us.

There was not much time left after the final instructions before the no walk, no talk period would commence (at 11:45pm so that everyone could appreciate the silence in this wilderness and hear EVERYTHING going on in the environment).

The ship even sailed away out of view behind a mountain so that we could not hear any engine noise. Almirante Brown could also be seen from where we were.

I setup my GoPro camera on a monopod to capture the night by taking a picture every 60 seconds. Unfortunately it only captured shots for about 2 hours before switching off.

I then went to sleep. Here is the footage I got:

That night the temperature was 1 degrees Celsius (before wind chill and factoring the chilly effect of sleeping on ice). I woke up a few times that night with cold feet and hearing eerie rapid footsteps which probably was from penguins visiting our camping zone).

I got up shortly before the 6am wakeup call to see other campers already awake and packing up. I was glad for that 6:15 am pickup by zodiac to the ship.