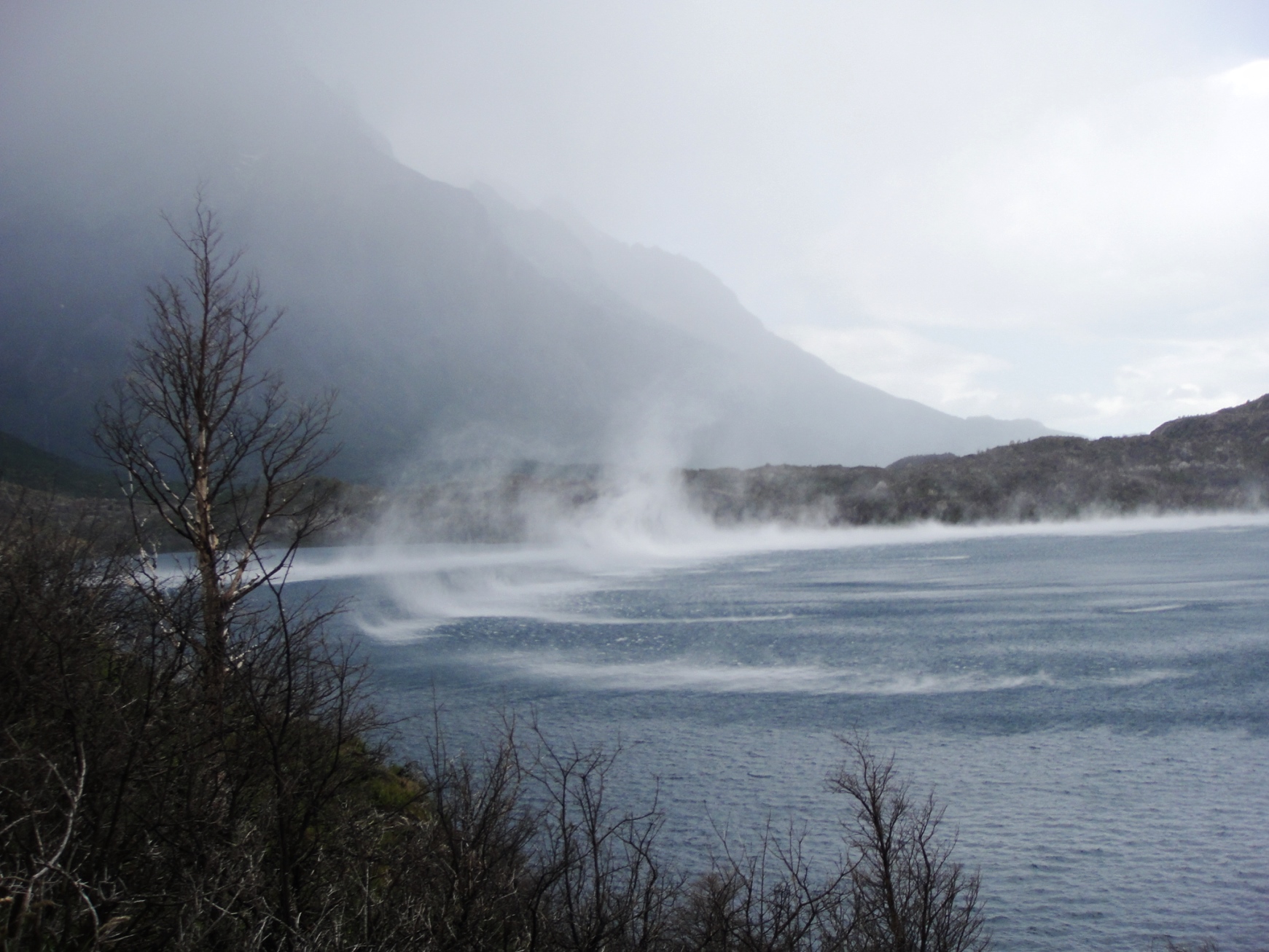 I had to be up early to catch the 9am shuttle from Hosteria Las Torres (which stops at Refugio Torres Central) to Laguna Amarga. By 0845 am I was outside and had to hide under a tree with other hikers to avoid being soaked and stung by the rain and strong winds.

The bus collected us a few minutes after 9am and transferred us to Laguna Amarga where I waited for that morning’s bus from Puerto Natales to arrive.

At 10am I traveled on the Puerto Natales bus (showing them the ticket I traveled with them on 2 days earlier) from Laguna Amarga to Pudeto where the catamaran for Paine Grande departs. We were at Pudeto by 10:45 am and all waited under the shelter at the boathouse to avoid being hit by rain in the violent winds again. Winds up to 97kph were forecast around 12pm for that day.

At 12pm I boarded the catamaran to Paine Grande (single trip 12000 pesos, return 19000 pesos; pay with cash on board). I was out on the top deck in the open to get amazing views of Lago Pahoe (which we were riding across) and the mountains beside it.

This was one windy trip where you had to turn your back to the wind at times.

By 1230pm I was at Refugio Paine Grande. I checked in, left my luggage, ordered some tea in the cafeteria (1000 pesos) and ate some biscuits with it. I also met the 2 German girls (from the bus and Mirador Torres) who returned from Campamento Italiano that day. I told them that I planned to make a return trip to Campamento Italiano but they said I should note that it is 2.5 hours away and its almost 2pm in the afternoon. I told them that maybe I won’t go all the way. I just want to get good views from the ridge overlooking Lago Pahoe.

At 2pm I decided to head off in the direction of Campamento Italiano. It was raining and there were great gusts of wind but the views were amazing.

I kept telling myself I’m just going to head to the top of the next ridge to see what was on the other side before turning back, but then I saw another ridge which my curiosity led me to.

I kept stopping to watch the wind creating unique formations of water that flew across the lakes (particularly Lago Skottsberg).

Here’s a cool video of it:

I also had to pass through eerie forests that were burnt in the fire at the park in late 2011.

First I had to cross over a huge river that runs between the Paine Grande and Los Cuernos mountain ranges.

It had a cool rope bridge. I met up with the ranger at the campsite who just questioned if I’m planning to spend the night there. I said no, I’m staying at Refugio Paine Grande. I asked him if there is a tap at the campsite to refill my drinking water, and he said no but pointed me to a small trail down to the river where I could easily refill from. Ice cold fresh water from the river…

If I had more time I would have been able to hike to Mirador Britannico and the windy Valle des Frances for amazing views. However the Dutch dad said that he had been up there earlier in the afternoon and there was too much mist so they couldn’t see much. At 05:30pm I decided to had back to Refugio Paine Grande. The weather was much better going back with the sun out, calmer winds and a little drizzle.

Looking back I had more amazing views.

There were beautiful Lupine flowers off the trail. It took me about 2 hours 15 minutes to get back to Refugio Paine Grande (including time for a few photo stops).

As soon as I got to the Refugio I collected my cooking equipment and food and headed for the rain shelter at the campsite to cook. I hiked about 15.3km that day for about 6 hours and was starving. The rice I cooked wasn’t enough so I also made myself a peanut butter sandwich.

Refugio Paine Grande has 2 terminals with internet access so I used the opportunity to send a few emails before showering and heading for bed.

Click here to read more about Day 2 or Day 4 of my trip.