Ello. The wrong solution, but a step in the right direction. 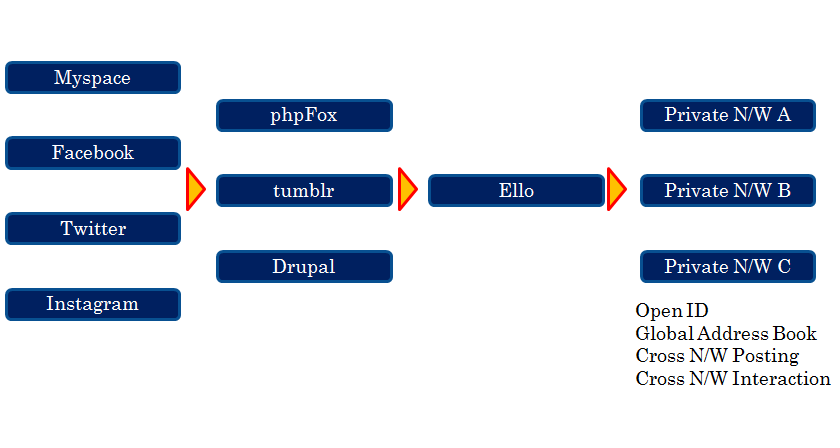 Ello. The wrong solution, but a step in the right direction.

By now you must have heard about Ello, the new social networking kid on the block. Although the solution is still in beta, and membership is invite-only, it’s drawing in more than 31000 sign ups per hour with an intriguing value proposition. An ad-free social network with a promise that your personal information will not be sold.

The platform is a mix between tumblr and twitter, where you can post a variety of media and tag people with the @ symbol. There is a simple solution to categorize your contacts: either as Friends or Noise. Of importance to many users, Ello allows you to remain anonymous by using a custom username instead of your real name. I’m assuming that unlike Facebook the NSA does not have direct access to user profile details.

These basic Ello features; unhappiness because of tighter user restrictions, deletion of posts and less privacy from the currently leading social networks; some great marketing and a strong group of people backing this alternate solution have combined at the same time to give you the latest in Internet hype.

I tried Ello and I’m not shy to say that I don’t like it.

I have no reason to trust Ello.

You may have seen the media reports that mention Ello is VC backed with $435000 from a Vermont firm. It means that they’re in it to make money. How? Ello says that it in time will offer premium features which users will pay for. Companies, particularly VC’s exist to make a profit. Should I trust that Ello is not going to change its terms and conditions in the future, remain ad-free, secure, and that my user data and activity on the site will not be used for commercial purposes? Trust is earned and gained from prior experience. Facebook started with no ads.  Twitter started with no ads, Facebook bought Instagram…

I also ask myself if Ello is the right solution and if it will be a success?

There are thousands of social networks available for you to join. We started off with Myspace before Facebook. It allowed you to post an assortment of content and remain anonymous. They tried multiple strategies but are no longer as big as they should be. Myspace has chosen to focus on music, tv artists and entertainment media.

You can create your own social network with scripts like Drupal and phpFox. There are plenty of private social networks that are both general or niche focused.  Traveldudes.org is a social network for travelers that runs on Drupal . I used to run a phpFox social site a few years back (called Cameway) before I shut it down (due to uncontrollable spam that I did not have the capacity and funds to maintain).

So, what’s the solution for a secure, ad-free, modern and user-friendly social network where you have control over your personal information?

Start your own social network! It requires money and will have to be hosted on your own shared or dedicated server. You don’t need to develop it from scratch. You can use a script like Drupal or phpFox. Both of these scripts support OpenID which allows you to create your own common profile which you wish to share across multiple platforms. It means that with an OpenID you can log into phpFox site A, phpFox site B and Drupal site C with the same user profile. You also have the ability to log into these sites with your existing Facebook, Twitter or a number of other social platform profiles.

The answer is a decentralized solution where you pay to own and maintain your own property. Just like capitalism with democracy. You’re going to see a little of the same problem that we have with multiple Android OS versions on phones: different networks are running different versions of the latest script with different functionality available. I don’t see that as a problem though – it makes the world interesting. There may still be one more problem to solve. I’m not sure if there is a global address book across social media platforms. Still, that’s easy to solve.

Only your local (private) community has access to all your information, you may have to look-up someone in their local community address book or the global address book, you may need a “visa” to obtain access to another private social network, and different social networks are at various levels of advancement based on how much they’ve invested in it.

Ello is a step in the right direction. It shows us that people are unhappy with the status quo in existing social media platforms and are willing to shift to a new network. I think that it’s best that they create their own network. We just need to find a way to cross-post and interact across decentralized private social networks. This is currently the best solution that I can think of.