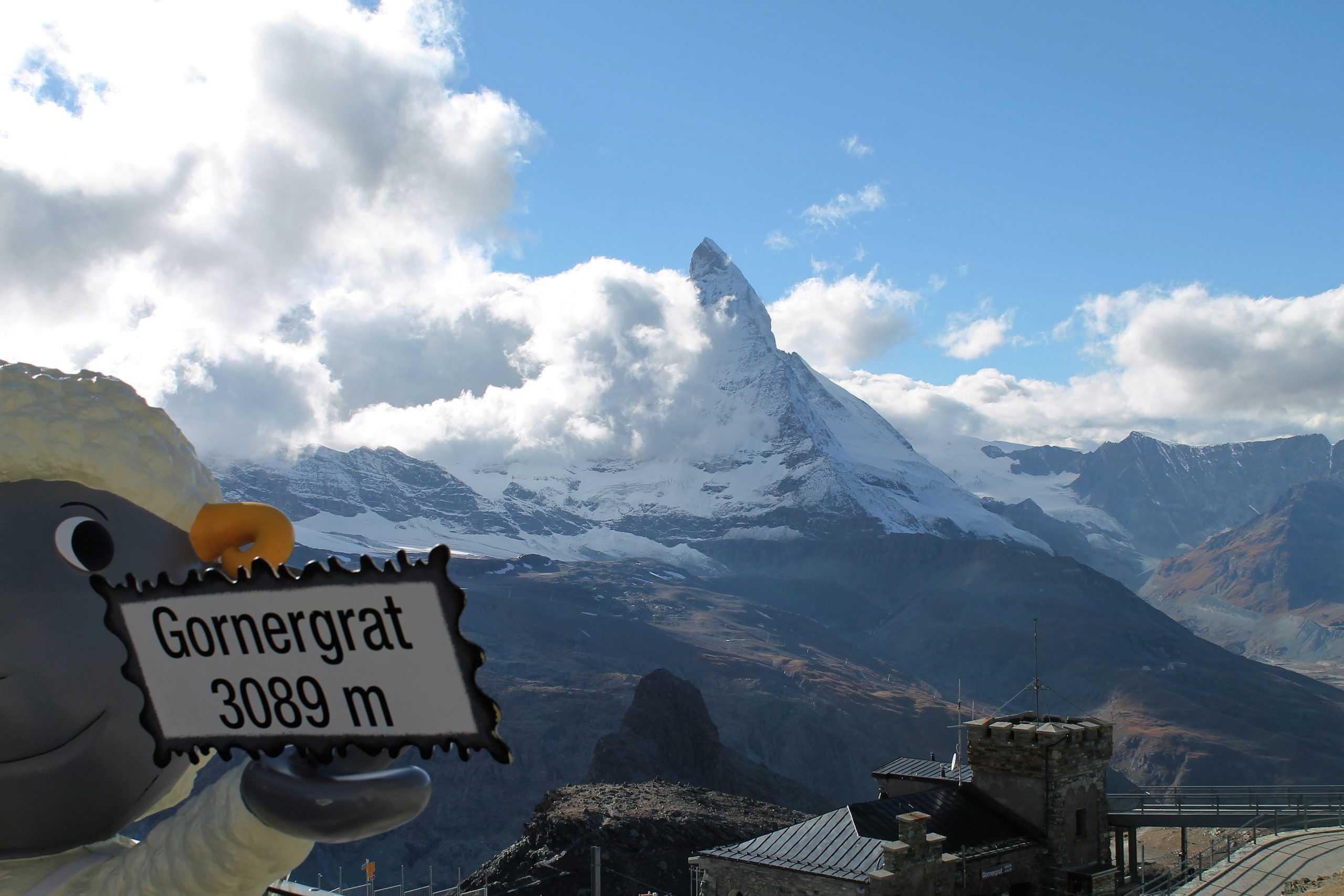 When I came out at around 1:30 pm after arriving in Zermatt from Chamonix a short while earlier I noticed that the previously cloudy sky seemed to be clearing up and the sun was beginning to show.

Opposite the hotel I found a halal Turkish restaurant. They only served beef products and I’m not a great fan of beef. Instead I ended up at a Bakery / Café. I ordered Swiss hot chocolate, apple tart and a small slice of praline choc.

Since the weather was improving I decided that I’d try to get a good view of the Matterhorn even though I was still tired.

I decided to purchase a Gornegrat Bahn ticket that transports you by rail to the tallest hotel in Europe via a number of high altitude rail platforms. The ticket up was being sold below the standard price (afternoon departure discount) for 41CHF.

The views of the Matterhorn were a bit difficult to capture on camera as the sun was shining just beside the great mountain.

I checked out the glacier and a number of other peaks in the area.

The restaurant serves a good cup of cappucino.

But even better is the view!

I visited a small chapel beside the hotel/restaurant.

Then I descended by rail to one station below, the Rotenboden station.

I got out with 2 girls, Jane from Germany and a Japanese now living in Canada. They said they were going to hike down to the little lakes (10 minutes away). That’s where you see the famous reflection of the Matterhorn. I had no idea, but followed.

The view were just spectacular.

The wind was low so that’s why we were getting a good reflection. I’ve read that the wind is generally at this lake just after sunrise or before sunset.

The girls took a few portraits of me.

Admittedly the reflections were looking better on camera than what we could see with our own eyes.

I walked to a smaller lake in front of Riffelsee lake but the views were not good out there.

We were there from 6:15pm. Sunset was 6:55pm and the next train down was at 7:02pm. If we missed that train we’d have to take the 8:02pm train – It’s recommended to be outside in the dark at that altitude without proper cold weather gear. We made our way up to the rail tracks by 6:50pm.

I found another spot close to the rail tracks to take some final pictures.

The train trip down was spectacular.

One of the rail staff members turned off the lights in the carriage we were in so that we could get better views of the scenery.

The girls gave me some recommendations on hikes in the area (I should take cable car to Furi and Schweitzee the next day; then hike down from Schweitzee following the number 12 markers for breath-taking views. It is a 3 hour hike). They also advised that if I’m taking the Glacier Express to St Moritz I should sit on the right hand side of the train for the best views.

I tried out the pizza at Grampie that night. Expect to pay over R300 for a pizza and cool drink.

I then turned in for the night.