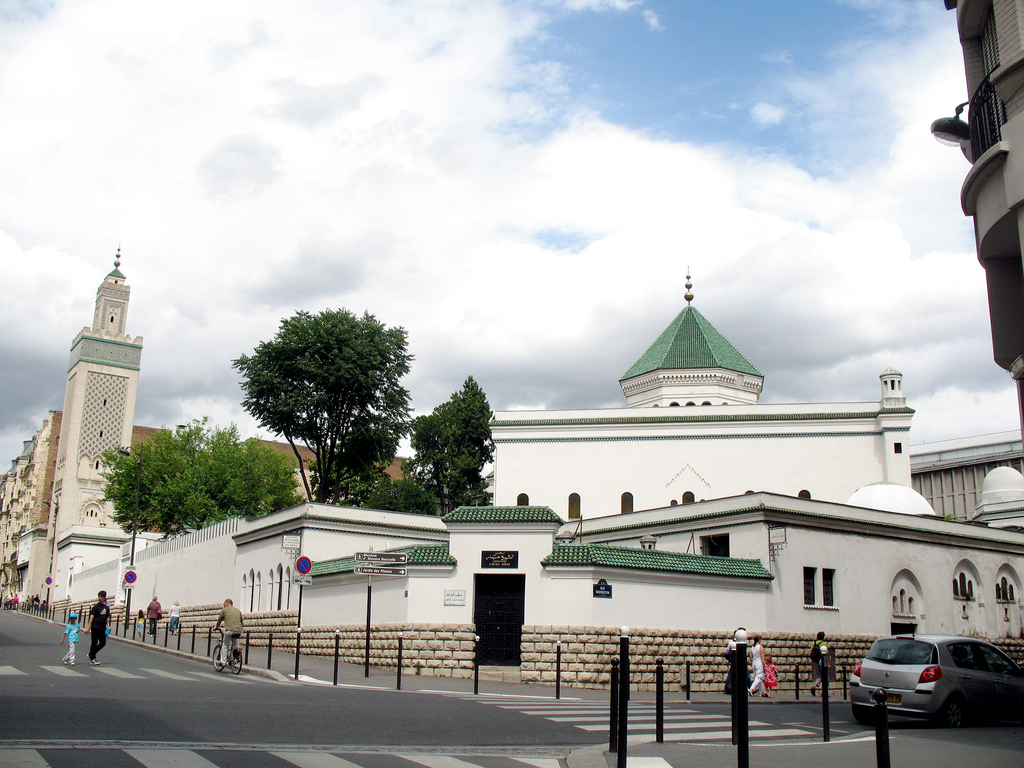 The Grand Mosque of Paris is located near Jussieu metro station (from Gare Nord I took the M4 metro to Odeon, switched to the M10 metro and got off at Jussieu).

There was some welcoming graffiti at this train station.

I arrived about 30 minutes before night prayers (Esha).

Prayer times for the mosque are listed on their home page here.

This mosque was founded  in 1926. It has a Mudéjar architecture style and reminded me of some of the mosques I’ve seen in Morocco and Egypt.

The corridors and prayer areas were dimly lit at night, but their was sufficient light to see the beautiful tiling.

The are some remarkable mosaic designs.

Look at the level of detail!

The mosque has a strange configuration. After entering you need to pass through 2 corridors to get into the courtyard section. I couldn’t find the wudhu (ablution) section.  A musallee (person who prays at the mosque) told me to follow him outside, around a corner and down a stairwell to an ablution room in the basement where you remove your shoes and change into one of many sandals on the floor. There are no seats so you have to stand in front of a tap and perform ablution. There is someone constantly mopping the floor. I don’t think that the design of this space is good.

I waited for about 30 minutes for Esha prayers.

There were quite a few groups of people in the mosque; some in prayer, some reading Quran, and some just chatting in small circles. A very relaxed atmosphere!

This is the central chandelier and roof decoration:

It looked like there was a table with cooked food being served at the edge of this central courtyard.

There are quite a few Quran’s of different sizes and scripts on the shelves in the main prayer area.

Recitation during salaah was beautiful, as expected.

After salaah I had a quick look at the Moroccan restaurant that is beside the mosque.

The restaurant also has beautiful decor on the ceiling.

Check out the restaurant menu here.

If I knew they were serving tagine I’d have skipped supper before visiting the mosque.

The facility also has a hammam for women only. Information on the hammam can be found here.

Anyone (from all faiths) can visit the mosque to tour the facility and pray there.

Interior of Paris Mosque by Farrukh under By-NC 2.0 license

Courtyard of Paris Mosque by Farrukh under By-NC 2.0 license

Mosque of Paris tiling by Farrukh under By-NC 2.0 license

Mosque of Paris tiling and mosaic by Farrukh under By-NC 2.0 license

Mosque of Paris mosaic by Farrukh under By-NC 2.0 license

Paris Mosque exterior by Lauren Rauk Under By NC-ND 2.0 license

Mosque corridor by Julian Dobson under By NC-SA 2.0 license

Mosque of Paris window by Laurent Bardin  under By NC-SA 2.0 license

Mosaic at Mosque of Paris by Zenen under By NC-SA 2.0 license