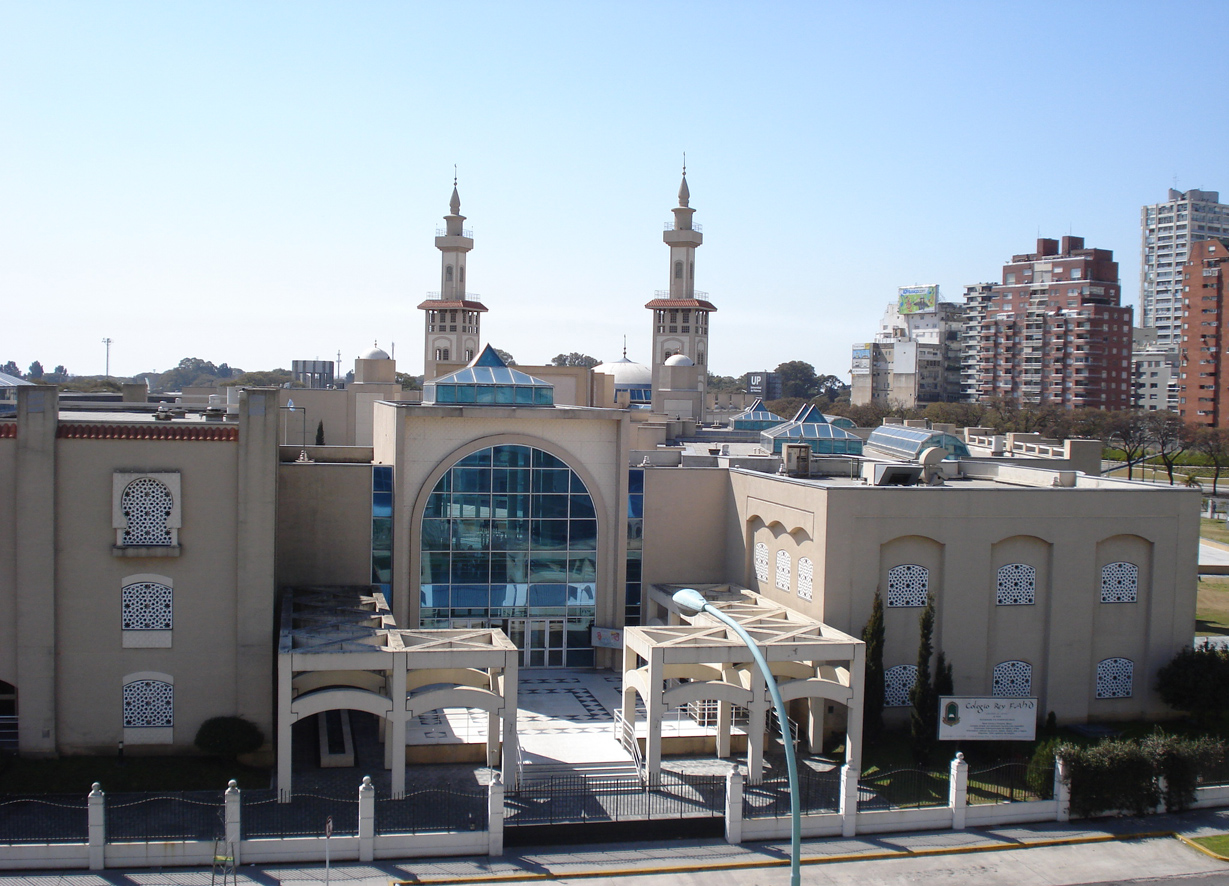 The King Fahd mosque is located in the middle-class Palermo Neighborhood in Buenos Aires.

It’s a 20ha structure with 2 minarets that lies on a 36ha property. The building was completed in 1996 but officially opened by members of the Saudi royal family on September 25, 2000. 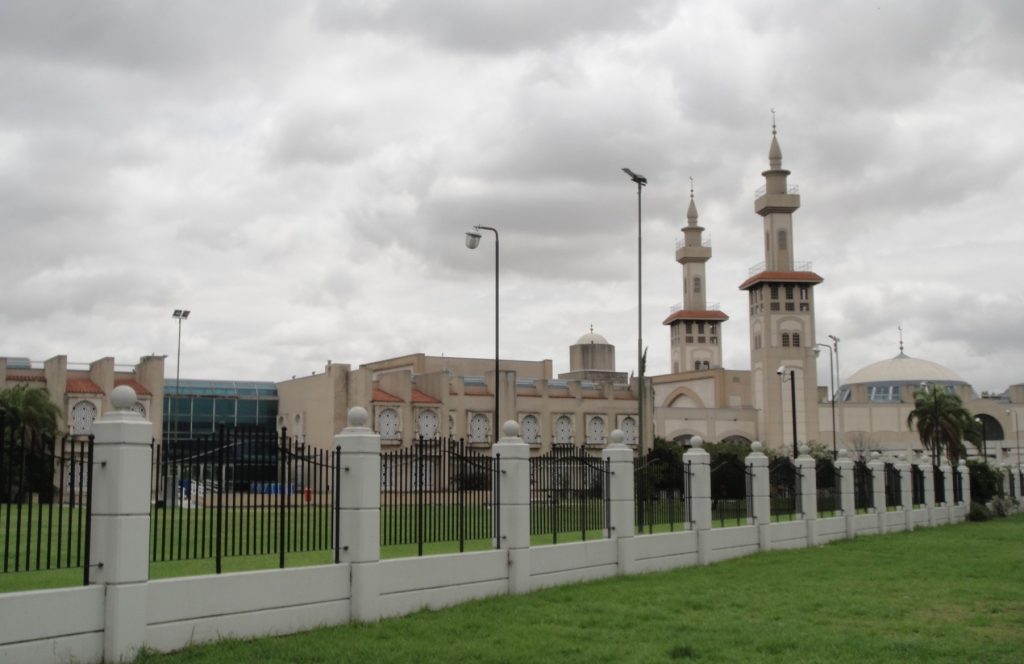 The center welcomes both male and female worshipers, with a capacity for 1000 men on the first floor and 500 women on the second floor of the prayer area. 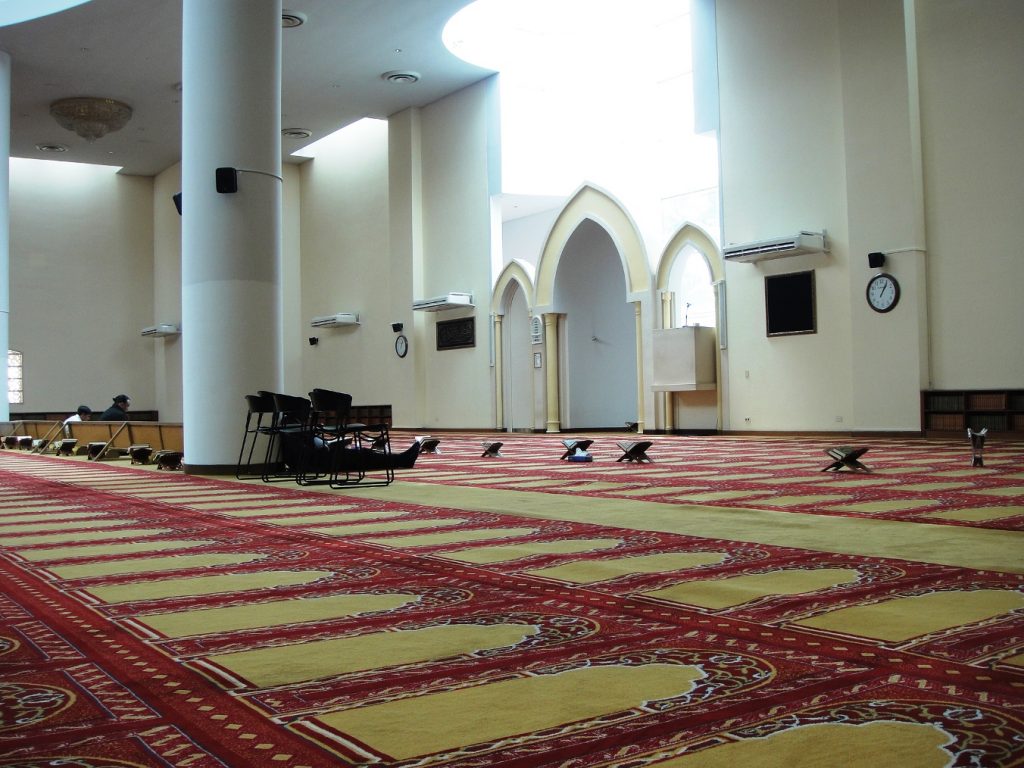 I visited on a Friday afternoon for Juma salaah (prayers).

I took Line D on the subway to Palermo station, headed 650m northwest (to my left from the subway station) on Avenida Santa Fe toward Thames, turned right onto Avenida Int. Bullrich, walked another 750m and found the center on my left.

At the entrance is a large water fountain, within a very spacious courtyard. 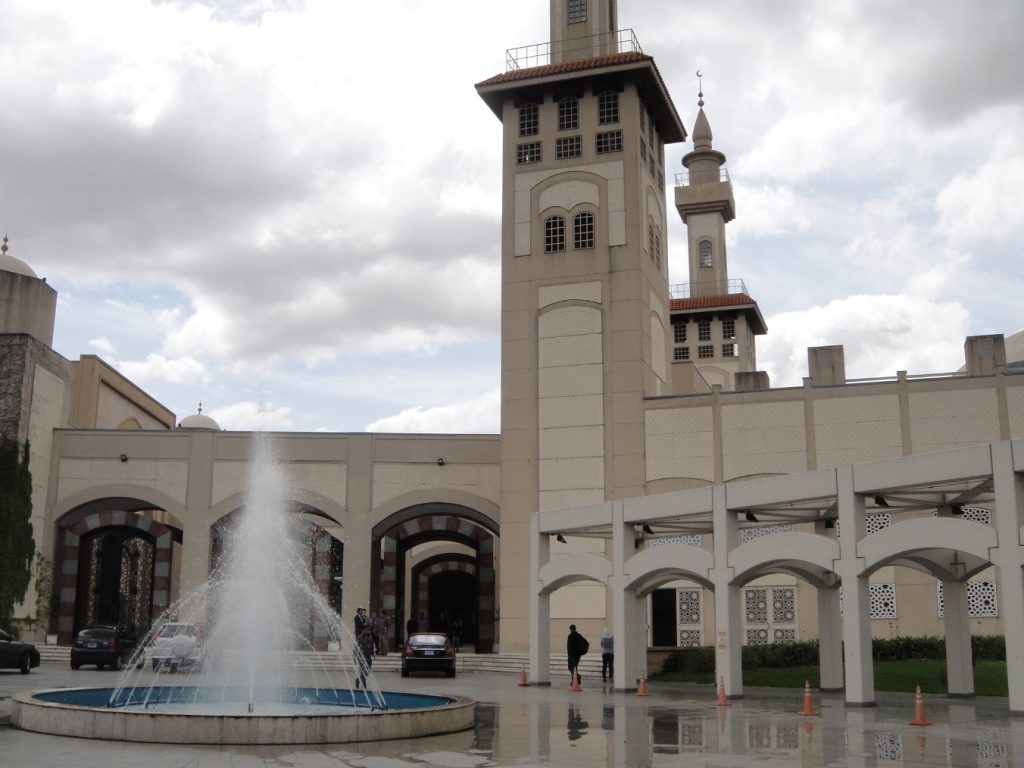 I arrived about an hour before prayers so I had some time to check out part of the center.

In addition to the prayer and ablution areas it has the following facilities:

The center runs guided tours for the general public and tourists (check their website: http://www.ccislamicoreyfahd.org.ar/ingles/ienglish.html for details), runs four levels of Arabic Language courses, hosts regular classes and seminars on Islamic Culture and Civilization and has a weekly radio program on “Discovering Islam” (Tuesdays at 15hs, 93.9 FM Palermo Radio). 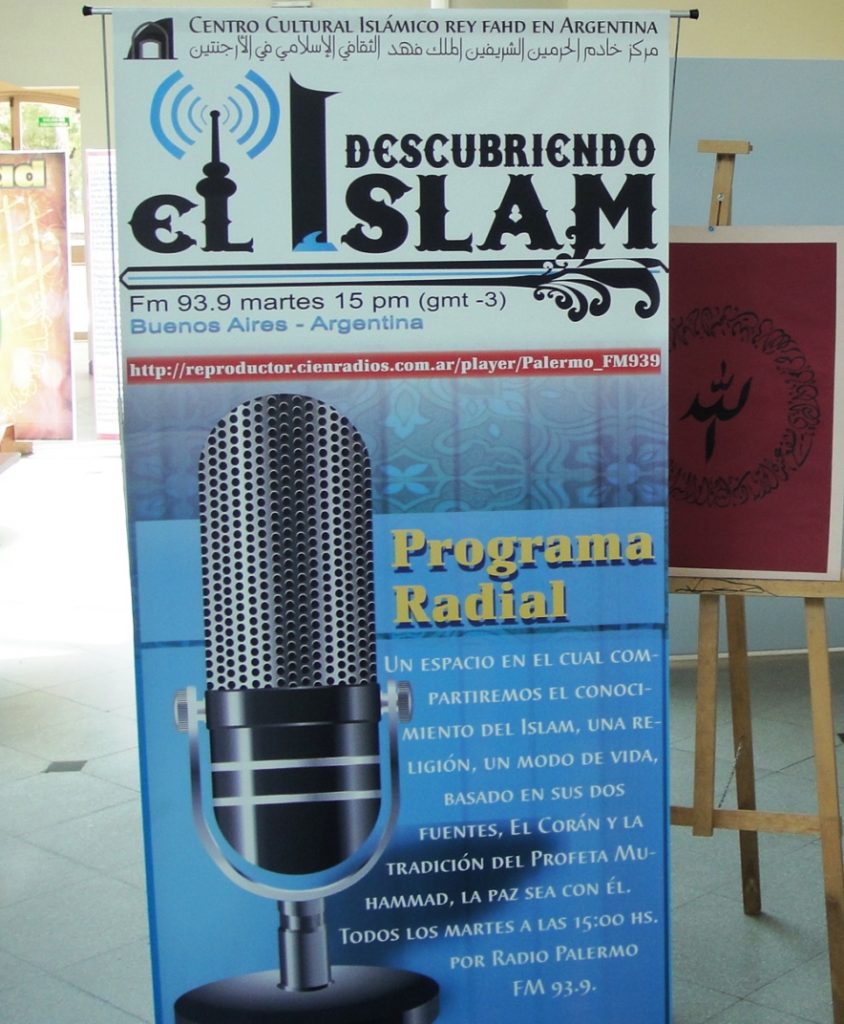 This is in addition to their regular school and mosque programs.

Argentina’s Muslim community is estimated to be around 1% of the total population (400,000 to 500,000 members). Some estimates take the number up to 1 million, with the majority being based in Buenos Aires. There is a very small number of mosques in Buenos Aires and this mosque is the largest in South America.
Still, I was quite disappointed by the turnout for Juma salaah. Excluding the school kids there were only about 20 adult men present 30 minutes after the first azaan, and not more than double that number present for salaah. I can’t figure out why.

Here’s a recording of the first azaan.

The khutba was in Arabic which I know very little of, so I couldn’t follow. As expected, the recitation was great during salaah, although the school kids were a little mischievous…

This is the central chandelier in the mosque. A simple but elegant design. 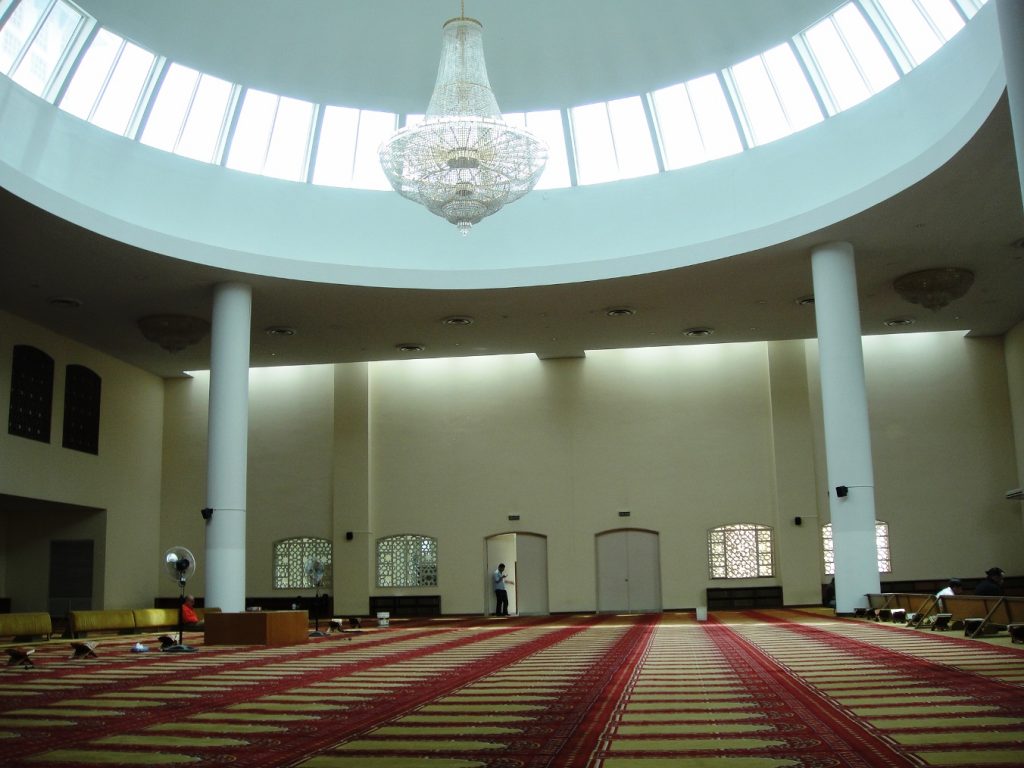 When you’re in Buenos Aires, make sure that you visit the Palermo neighborhood so that you can check out the mosque. They’re running some fantastic programs. Prayer times and further information can be found on the mosque website.

After praying I decided to look for some halal food in the area. I found Al Rawshe, a halal Arab & International cuisine restaurant near the Plaza Italia subway station in Palermo. It is run by Executive Chef Ali Wehbi, and is located on Botanico 200, Palermo, phone: (11)4831-0608). 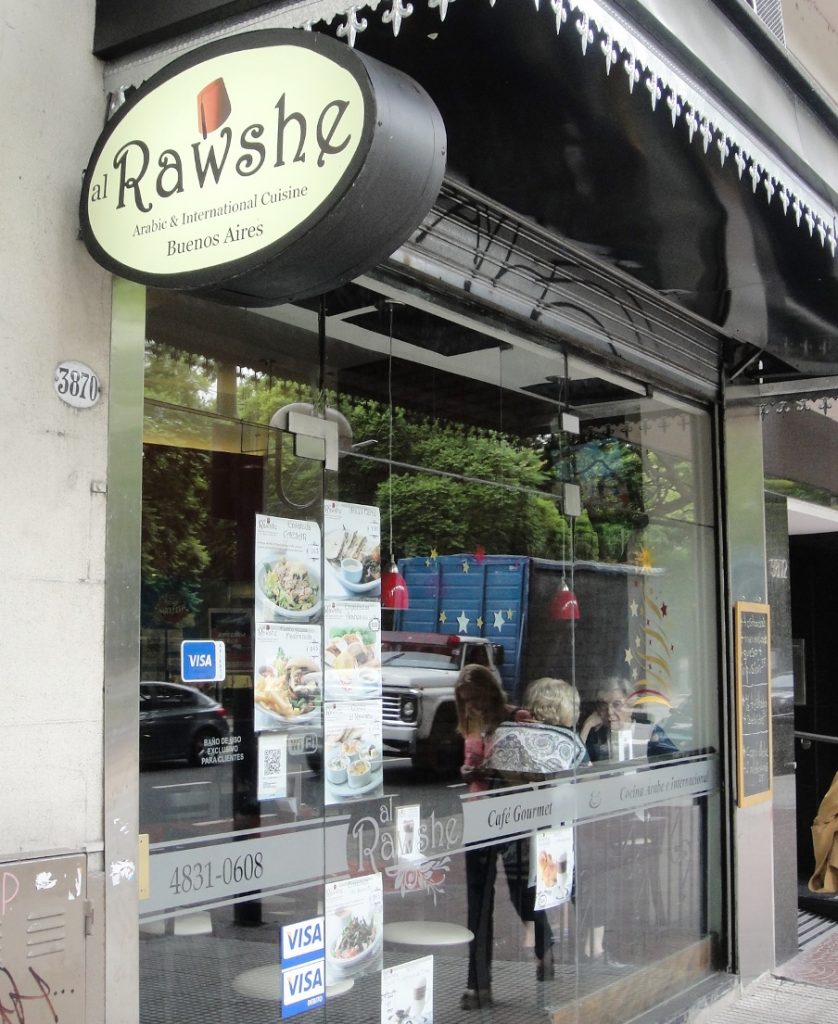 I ordered iced mint lemonade and a mixed plate of appetizers (hummus, eggplant, Arabian cheese and a small portion of some chicken-cube within white sauce appetizer) with bread.

It’s a restaurant that I’ll highly recommend for those looking for halal food.

Mosque exterior by Tanoka under CC license by NC 2.0