Learning to Sail in Cape Town

Learning to Sail in Cape Town

Get ready to tack, you’re to close to the no-go-zone, furl the genoa, get the winch ready! These are some of the terms I had to get accustomed to responding to during my first lesson in sailing.

I’ve spent many months at sea on mega-liner cruise ships; and traveled between ship and shore on electric powered zodiacs, lifeboats and ferries. I’ve even crossed the treacherous Drake Passage to get from South America to Antarctica and back. But I’ve never sailed with just the wind, and could never claim to know anything about sailing. If you read up on Maritime History you will realise that humans were sailing more than 5000 years ago. On a planet that’s more than two-thirds water they had to find a way to get around!

I purchased a copy of the RYA Start Sailing handbook a few months ago and tried to teach myself some of the basics. I found it really difficult to learn the theory without being on a yacht observing the effect wind has on the sails and having someone explaining everything to me.

I had a look at a few international and local sailing schools before deciding to book a full-day sailing course in Cape Town with the Cape Town Sailing Academy, a day after I attended the 2014 Gartner Symposium.

Generally, people serious in learning to sail would start out on a 4 – 7 day Competent Crew course before progressing to Day Skipper, Coastal Waters and more advanced courses. I decided to just opt for a single day course as I only had a weekend free. The introductory course is very cheap. Just be prepared to trade some sweat by doing hard work on the vessel for the privilege of learning at sea as it’s no pleasure cruise 🙂

I arrived at the Royal Cape Yacht Club on Duncan Road at 9am to meet my instructor. He was seated in the restaurant with another group of people. One gentleman from the group had purchased a yacht before he knew anything about sailing. He was training for his competent crew certification. Another person had his Day Skipper and was training for Coastal Waters. They were going to train on the world-famous Intrepid yacht which made headlines in 2010:

I’d be going out on the Chantecler with the instructor.

After going on board I immediately went below deck to leave my gear and receive safety instructions. The instructor pointed out all the emergency equipment to me.

I then went back on deck where we began to prepare the yacht for departure. I had to pull the yacht in horizontally with the stern line before casting off and assist with bringing the fenders on board. The instructor then piloted the vessel out of Duncan Docks under diesel power.

Once we were out of the docks we pulled on the halyards to raise the sails. Initially the wind speed was very low (around 4 knots as I recall).

We took turns at the helm plotting a number of courses towards various distant objects. I was told that you cannot sail directly or within 30 degrees of the direction that the wind is blowing from. I had to keep glancing at the wind direction indicator on the masthead and ensure that the tail of the wind direction arrow was out of the “V” shape (which is termed the No Go Zone).

My first heading was towards a buoy.

When we passed the buoy we saw Cape Fur Seals chilling out on it.

There were also dolphins in the vicinity of the Intrepid  yacht. It started getting chilly as we headed out of the harbor. The wind speed was now averaging 16-18 knots and the “moderate” south-west swells were making the experience on-board a little choppy. Each time we changed direction we had to tack (turning the vessel with the bow going through the wind) or gybe (turning the vessel with the stern going through the wind). Tacking is safer as the boom is more secure. Believe me, it is a lot of effort tacking and gybing – you need upper body strength pulling and winching the lines.

We passed by the noisy bouy which Green Point residents have been complaining about. The loud siren on it beeps the letters Y.O.U. in Morse code as a warning that “You are in danger if you approach”. I believe there is a rock 14m beneath the buoy.

The instructor boiled water and we had a hot cup of coffee with the lunch we brought. I think I had the best view of Table Mountain and the stadium on that day!

While eating we had to be alert of other vessels passing nearby. 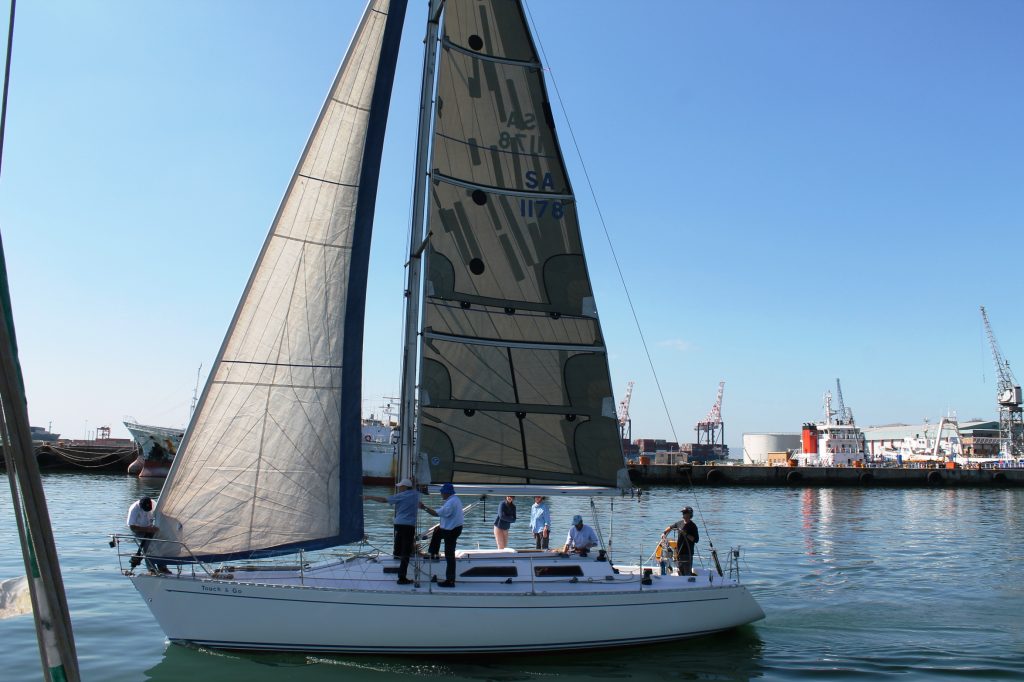 There were a few ferries carrying passengers to Robben Island. I learnt that a starboard tack yacht (wind is coming from the right hand side of the boat) has right of way over a port tack yacht.

Vessels under sail have right of way over electric powered vessels, and commercial vessels have priority over all vessels.

We sailed close-haul (yacht direction was 30 to 45 degrees off the direction of the wind), close reach (30 to 60 degrees) and broad reach (90 to 120 degrees). I was at the helm on a broad reach when the wind suddenly picked up to 22 knots. The yacht was heeling almost 90 degrees (i.e. it was leaning to the side almost at a right angle to the water). This got me nervous. I wanted to turn the yacht in the opposite direction to which we were heeling but that is the “no go zone”. I’m not allowed to sail in the direction of the wind. The instructor previously told me not to worry about heeling as the vessel is designed to heel up to 110 degrees. If it capsizes the mono-hull is designed to self-recover but I should not worry as that rarely happens. Still, I was nervous. Correction: I was scared!

The instructor took over at the helm and told me to furl in the genoa. I was scratching my head… what does furl the genoa mean? I had to walk on deck to the front of the yacht while it was heeling to pull the line attached to the smaller-sized sail in the front of the vessel. The wind was too strong and this was one of the reasons why we were heeling. I tried pulling the line but it did not move much. The instructor went further to the front and pulled the line where it was easier to draw down the genoa. I then rushed to the helm area to pull in the slack and tie it down. Fun times!

We sailed until about 2pm before heading back to the docks. The signal lights on the port control tower were indicating that a commercial vessel was preparing to depart.

Once we got closer to the harbor the commercial vessel sounded 5 short blasts on its horn, indicating to another speedboat that they need to get out of the way.  We lowered the sails, and re-attached a strap to the bow of the yacht.

In terms of tying knots I learnt how to tie a clove hitch when we re-attached the fenders and switched to diesel power before entering Duncan Docks to dock.

We then met up with the Intrepid crew at the club house for some drinks in the restaurant and to trade our experiences of the day.

Looking back at the day as I type this article I believe I learnt quite a lot about sailing (disclaimer: It’s possible that I may not have used all the correct terminology in this post).However, I surely did get an excellent introduction into sailing and would like to do the competent crew course in 2015.

If you’re in Cape Town and want to try something different try sailing! If you do get sea sick there are meds you can take to help you (e.g. Stugeron – speak to your doctor)

To learn more about the Cape Town Sailing Academy check out their website: http://www.capetownsailing.co.za/
If sailing is not for you and you’re starting your South African adventure in Cape Town and would like to do something more land-based, there are amazing routes to choose between; whether it’s scenic wildlife watching, city sightseeing or road tripping. With a number of places to see and things to do on your travels in SA, The Greatest South African Road Trip: Cape Town to Mozambique is a great guide to start with, sure to pique your interest and get you packed up in a jiffy for some road trip fun.

2 thoughts on “Learning to Sail in Cape Town”