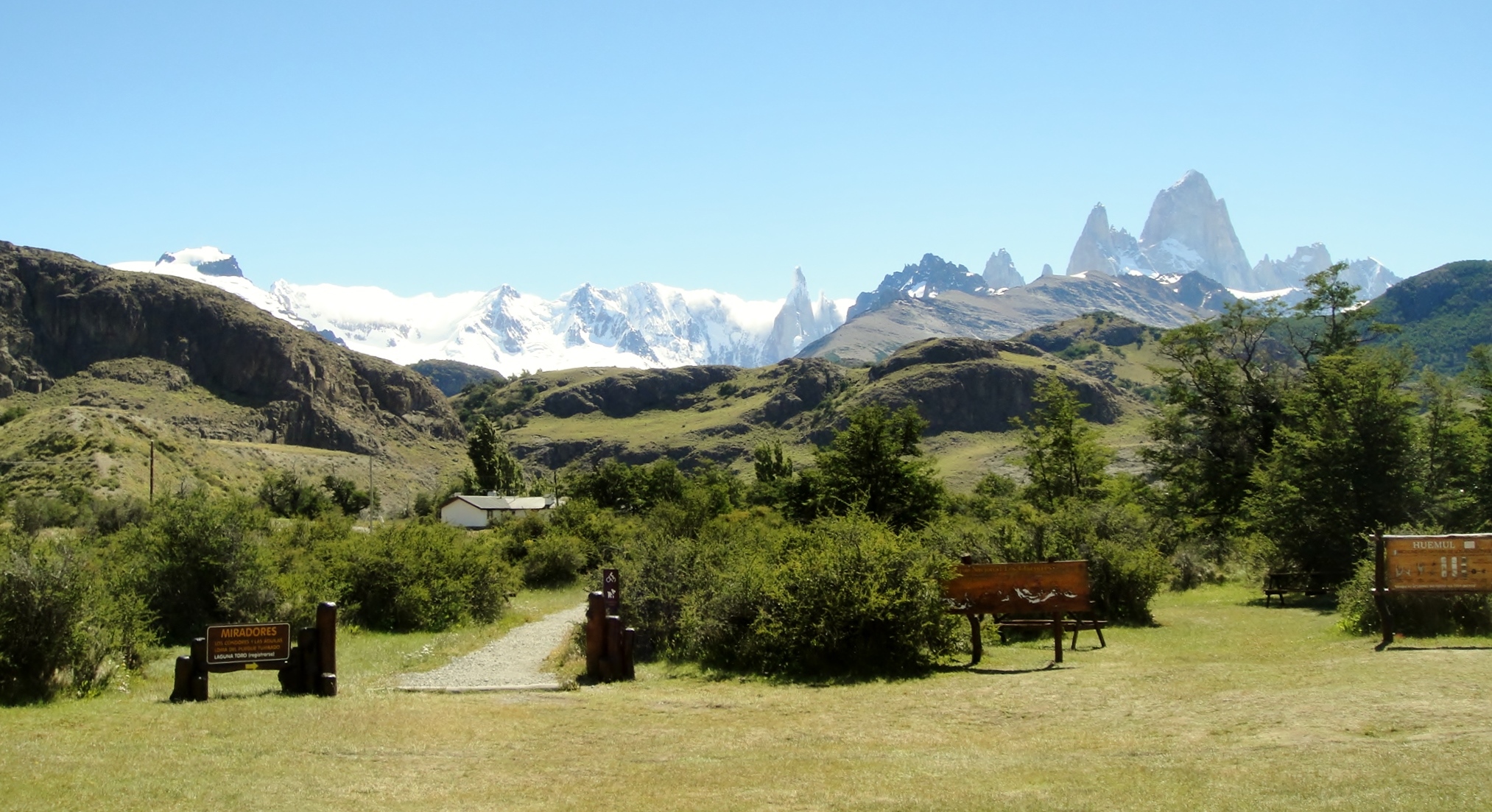 I got up and took my time this morning. I had a late breakfast at Hospedaje Lautaro in El Calafate before I headed for the bus station to buy my ticket to El Chalten. The Perito Merino glacier is near El Calafate and it is apparently quite spectacular to see, but I’d seen quite a few glaciers for the moment (in Antarctica, Alaska, Torres Del Paine…) so I decided to skip it. The bus departed at 1pm and the journey was quite uneventful except for some beautiful views of Mt Fitzroy and Glacier Viedma as we approached El Chalten at approximately 4pm.

We were fortunate that the bus driver stopped 5 minutes out of El Chalten to allow us to take some pictures of Mt Fitzroy.

At the town entrance the bus stops at the Tourist Information office where we are given advice and told the rules for hiking in the area.

They also provide a free map with useful hiking trail information. Here’s a pic of a hiking trail guide on display their.

The tourist information center located at the edge of town has an impressive view of Mt Fitz Roy.

At the bus station I then made my way to Rancho Grande, my accommodation for the next 5 nights.

After checking-in I headed off into town for some great ice-cream, to take a look at this small town and eat at Restaurant Vegetariano which makes some spicy Indian dishes and masala chai tea.

That afternoon I saw something strange pull up beside my hostel room window – a “hotel” on wheels pulled up next door. A German tourist group were staying on a bus which had beds accessible from the outside. It almost reminded me of those chambers where bodies are kept in morgues. This was too funny for me!

I took it easy for the rest of the evening and met up with Fabio that night (the guy I met in Torres Del Paine) for a light dinner and to discuss trekking options in El Chalten.

Here’s a basic map from Patagonia Express to give you some bearings of the landscape when trekking and camping around El Chalten.

I also took it really easy without doing any major activities on my second day in El Chalten. This was my holiday and I’d been travelling since 22 December (visiting Buenos Aires, Ushuaia, Antarctica, hiking in Torres Del Paine National Park, visiting Puerto Natales and El Calafate). Sometimes, you need a break during a holiday.

That afternoon I was surprised to bump into a girl from Singapore that I previously met in Puerto Natales (before my trip to Torres Del Paine). She invited me to a place with her friends that evening, but I searched and couldn’t find it.

When I returned to Rancho Grande I saw Fabio sitting outside and a couple nearby, so I decided to join them. Fabio showed me some pics of the trek he did that day. The guy from the couple asked me how long I’m staying at Rancho Grande – I said 5 nights. He was surprised that I was so lucky to get so many nights (I booked a week earlier). They had to split their stay among a few places in El Chalten as they did a very last minute booking. He recalled seeing a young lady at the reception of Rancho Grande surprised that there were no beds available when she tried to book on the day. The young lady looked like she was about to cry. He tried to console her by saying that if she wants, she can rent a tent from Rancho Grande and sleep outside in the garden, but he thinks that he may have made her feel worse (from the look on her face). Hehe, poor gal!

In the morning at breakfast I met the girl from Singapore who was checking out and flying to Buenos Aires that evening. She had struggled to book her flight with a travel agent and on the internet terminals at Ranch Grande due to the slow and unstable internet connections in El Chalten, so she asked a family member at home to make the booking. We exchanged FB details. Ind I also spoke with another friend of hers who was also taking it easy in El Chalten.

That afternoon I decided to try out some hiking so I looked at the map and decided to get onto the 2 easy trails just across river Rio Fitz Roy, behind the information center.

I went onto the Los Condores and Los Aquilas trails. The former gives you a good view of town, Rio Fitzroy and Rio de Las Vueltas.

The latter affords you a view of Lago Viedma and the vast expanse that the bus travelled to get to El Chalten.

These were fairly easy trails, except for the fact that it was quite windy at the top of the trails.

Later that evening (where the sun sets very late) I decided to take a short walk on part of the Chorillo del Salto trail / road (although not all the way to the 20m waterfall at the end of the trail).

If you have a car you can travel all the way to Laguna Del Desierto and  very close to Chorillo del Salto.

Today, I did absolutely nothing, except for some writing and relaxing. I went to La Wafleria for lunch. La Wafleria has an extensive variety of hot chocolate flavors. You’ve got to try some of them when you’re in town.

Guess who I met there? The retired Californians (the one who used to work at HP and the sailing instructor) that I met at Refugio Torres Central in Parque National Torres Del Paine.

In La Wafleria, there is one big table with benches on either side that multiple parties share. They were allocated a seat directly across me. We chatted about our experiences at Torres Del Paine and on our plans for El Chalten. The husband said that he believes that the world sailing speed record may have been broken by South Africa, but if there were sailing boats on the lakes of Patagonia it’s possible that the high winds may make it possible for a new speed record to be set. They were planning to hike the next day and heard that the weather would be perfect.

I just took a leisurely walk through El Chalten town that day.

For supper I tried the local catch: trout at a French restaurant.

Finally, I decided to get a closer look at Monte Fitz Roy – because that’s the reason I came to El Chalten. I decided to do part of the Laguna de Los Tres trail.

It’s an 8 hour return trip, but I set an initial goal on Laguna Capri (1hr 45 minutes away). The first hour on the trail is a steep climb.

Initially I thought I didn’t have the energy to do it, but then the gradient decreased and the trail became easier. I had to remove my fleece layer on the way up as it was hot and sunny, plus the climb made me feel even more hot.

There’s a nice lookout point over Rio de Las Vueltas on the way up.

This trail passes through a few forests.

There is a camping spot near Laguna Capri.

When I reached Laguna Capri it was much colder so I had to add back a layer of clothing.

The view of Monte Fitz Roy was fine but I felt that if I went a little further (towards Campamento Poincenot), through a forest beyond the first ridge I may get an even better view.

I hiked for another half hour to River Bianco, and got a much better view of Monte Fitz Roy.

Some other hikers took a pic of me there.

I don’t do selfie sticks!

On the way to Monte Fitz Roy and back you pass through some great scenery, within and above forests, like this huge rock formation with boulders.

There are a few directional signs there but myself and a few hikers found it a little confusing.

I stopped at Laguna Capri on the way back and paused to take in the view, watching the crystal clear water. You can also see the peak of Cerro Torre on the other side of Laguna Capri.

Four hours after I began the hike, I was almost back at El Chalten.

The view of Rio de Las Vueltas was cool.

Here’s a view of the street that I was staying on in El Chalten (there are only 2 main streets).

That evening I ate a sandwich at La Wafleria, and later that night I decided to get some ice cream from Domo Blanco before returning to pack my bag for departure to El Calafate airport the next morning.

It’s too bad that I came to El Chalten a bit exhausted. If I visit again, I’d definitely want to go on a multi-day hike.

Some general tips on El Chalten: