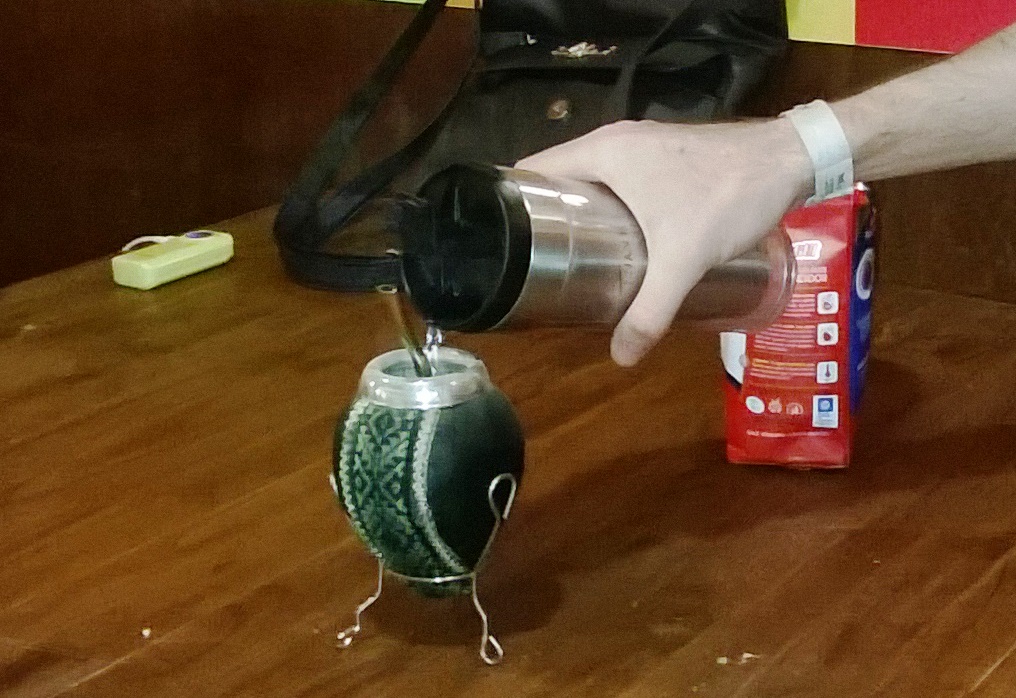 I awoke at Florida Suites with a list of tasks to do for the day. First task, extend my accommodation (I’d only booked one night. My itinerary was flexible / non-existent).

Then, get money – I only had 80 pesos on me, so I exchanged US$150 at the Boston Exchange, getting 10 pesos to the dollar (the rate had gone up as I previously only got 9.45 in Buenos Aires a month prior. In Ushuaia I was only getting 8).

I felt like visiting Uruguay the next day so the receptionist at Florida Suites booked my ferry ticket to Colonia. There was no need for me to go to the Colonia Express office. A ticket to Colonia, and a return ticket from Montevideo by ferry set me back 808 pesos. I would also need to buy a 200 peso bus ticket from Colonia to Montevideo.

I then headed off to the largest mosque in South America located in Palermo for Jumah salaah, and then for lunch. You can read a separate review of the mosque here.

I used the metro to get from Cathedral station to Palermo on line D. It’s pretty simple using the Subte / Subway in Buenos Aires. You pay the ticket sales agent 3.5 pesos for the one way ticket and then get onto the train.

On Whatsapp my friend (who was in San Telmo on a walking tour) asked if we should meet up to check out La Boca. After some thought we decided against this as we were advised that La Boca is not safe to visit after 5 pm. Instead, we decided to head to the Recoleta cemetery where Evita and the rich and famous are buried. I tried the GPS and walking directions on my Nokia phone but it took me to the wrong place so instead I used a taxi to get to the cemetery.

I arrived at the entrance just in time to meet my friend at the agreed upon time.

I was expecting an ordinary cemetery but this place was anything but ordinary. Huge tombs, mausoleums and statues fill up this cemetery.

After more than half an hour of struggling to find the tomb of the actress-turned-First Lady Eva Perón (also known as Evita),  I decided to pull out my Lonely Planet which had directions that led us directly to the tomb. The map of the facility at the entrance does not help and nobody that we spoke to could give us accurate directions.

Compared to the other tombs Evita’s was quite simple.

Check out this article to learn about more famous people buried here.

After the cemetery visit we tried to search for La Bielle, a highly recommended café near the park beside the cemetery.

After a few minutes we found it with the help of the maps in the park.

It is besides the oldest planted tree in Buenos Aires.

The café even charges a  extra price to sit outside under the tree.

We found a good spot inside, beside the window. Another friend from Idaho joined us.

Before departing I briefly shared a table at La Biela with some of the local folk.

After La Biela we stopped at a supermarket to purchase some evening snacks and then headed off by taxi to Florida Suites.

My friend was  going to introduce us to Mate, a traditional local drink. We met in the lobby, he boiled water and brought the (yerba) mate with the special cup and straw to drink from.

You half fill the cup with mate, add hot but not boiling water and then drink from the straw.

There is a special etiquette to drinking mate. The person who makes it drinks the first cup, and possibly the second (which may be really strong and hot). You then refill the cup with hot water and pass it to the next person to drink from.

A single cup can serve up to 10 rounds of mate, (with the addition of hot water only on each round). To me it tastes a little like Darjeeling tea that is super high in caffeine. I couldn’t drink more than one full round as my head was starting to buzz with the caffeine. As per etiquette, if you do not want to partake in a further round in mate you say “Gracias” when handing the cup back to the person who prepared the mate.

It was now around 1030pm. We decided to take a short nap and shower before meeting up later for supper and to check out what the city of Buenos Aires has to offer at night.